Ah, a king’s life! Deposition and imprisonment, destitution, murder, getting backtalk from lippy counts… It’s not like there’s ever a bad time to be king, but the tenth century definitely doesn’t have much of a good reputation when it comes to kingship. Medieval historians tend to like their government big and preferably royal, whether that looks like the ambitious clique-management of the ninth century or the more legalist bureaucracy of the twelfth. Either way, the majority of tenth-century kings outside of England, particularly those of Italy and France – the latter kingdom being my own research area – have gotten the short end of the historiographical stick.

In the last decade or so, there’s been various attempts to rehabilitate the tenth- and eleventh-century kings of France – usually called ‘West Frankish’, as it’s less anachronistic – and show that they were really more effective than people used to think; and OK, that’s true, but it misses the point a bit. No matter how you slice it, kings like Louis IV (he’s the ‘destitution’ hyperlink above, because at one point he lost every single property he owned to a wannabe-puppet master, albeit only temporarily) had fewer options open to them and a smaller range of manoeuvre than their ninth-century predecessors. The interesting question to ask is what actually changed about Carolingian kingship between (say) 840 and 1040? 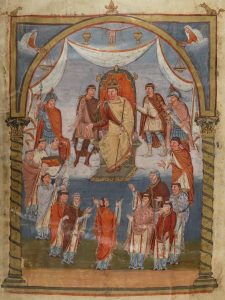 Well, one important facet of Carolingian kingship was how it was conceptualised: what characteristics and responsibilities contemporaries assigned to it, and how much space for action kings were seen as having. Here, the key word is ministerium. Literally ‘ministry’, this Latin word encompasses the duties of an office. Kings had their own ministerium, but so did counts and bishops. Over the course of the ninth century, a coherent ideal of royal ministerium was developed based on older ideas about correct royal behaviour, and as luck would have it this idea was still around and still being explained at the very beginning of the tenth century, at the 909 Council of Trosly:

“It is the particular ministerium of kings to govern and rule God’s people with equity and justice, and endeavour that it might have peace and concord. [The king] is first of all the defender of churches and servants of God, widows, orphans, other poor people, and all the needy. In this regard, it is his fear and his business above all (insofar as possible) that no injustice be done; and if it is done, he should in no way permit it to endure…”

This is a very classically Carolingian view of a king’s job – so classic, in fact, that it’s a direct quotation from another council eighty years earlier – and it covers most of the bases: the king must do justice and defend those who cannot defend themselves, and particularly the Church. Key here is the role of bishops, for the records of the Council are actually presented as a very long speech from the Archbishop of Rheims. If the king is to defend the Church, it is the bishops who must exhort him to fulfil his duty: they are the guardians of the kingdom’s salvation. 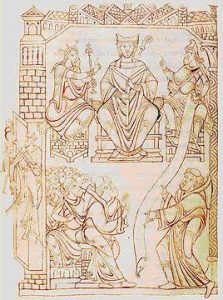 Deposition and imprisonment, destitution, and back-talk, pretty much. Even with the best will in the world, poor King Louis IV up there was self-evidently not going to be much good as a protector and defender of churches and orphans from inside a jail cell, which is where he was for most of 946.

Actually, I’m being unfair, and rather facile to boot. The period of crisis under Louis was temporary and short-lived, and his successors such as Lothar and Robert the Pious look rather convincing as active and powerful kings. However, that these kings were relatively powerful did not mean that their authority looked the same. Changes in the dynamics of royal power interacted with changing attitudes to lay power within the Church, evolving ideas about monasticism, and shifts in how churchmen approached disputes which bear as much if not more on this question. That said, the Chronicle of Mouzon (an abbey on the border between the East and West Frankish kingdoms) describes how Archbishop Adalbero of Rheims, ‘since justice slept in the hearts of kings and princes’, gathered up soldiers and militarily resisted those who took property from his church (this happened probably in the 980s, and the text was written maybe 20 years later). At around the same time, the so-called Peace of God movement spread across France, as bishops organised movements swearing oaths to defend the peace of the Church. King Robert the Pious in particular participated in this movement but (as Bishop Gerard I of Cambrai argued at the time) this was a real change, from bishops exhorting kings to protect them, to bishops doing it for themselves, although sometimes with the king as an equal partner. By around the year 1000, one can see a change in perceptions of West Frankish kingship in which ideas about specific royal ministerium played less and less part.

Did anyone complain about this?

In one case, at length and in detail. The Adalbero of this post’s title was not the Archbishop Adalbero of Rheims mentioned above, but his nephew, Bishop Adalbero of Laon. (That particular family provided a lot of bishops in the region west of the river Rhine, and these two were not even the only ones called Adalbero…) Adalbero was given the bishopric of Laon by King Lothar in 977, and went on to be bishop for around fifty years; by the end of his reign, he was very elderly and rather cranky.

In around (maybe) 1005, he wrote a poem addressed to King Robert the Pious, complaining that the society which he saw around him was shifting. What should be three clearly-defined orders of society – those who pray, those who fight, and those who work – were becoming more and more blurred. This, for Adalbero, was symbolised by the monks of the Burgundian abbey of Cluny. In his poem, he says that he sent a monk, learned and pious, to find out what was going on there. But when he returned, he was a mess, no longer dressed as a monk, but as a knight, swearing allegiance to his new king, Cluny’s abbot, describing an expedition to fight the Saracens, relaying the abbot’s instructions: ‘Put a helmet on your loins, a flowery band around your head, and a sword in your teeth! Ride two per donkey, ten per camel, and three per buffalo!’ Unsurprisingly, this absurd army lost the battle.

For Adalbero, the blurring of what he thought should be the very distinct roles of Church and king could only lead to both trying unnaturally to do the other’s job. And it is here that we come, at last, to the coins of the title.* Adalbero issued a very unusual type of coin, a double portrait issue. On one side, a king; on the other, a bishop. It is hard, in light of the fear of blurred social roles evidenced by his poem, not to see this as a depiction of how the bishop of Laon thought authority should work: the king doing his job, the bishop doing his; both distinct and both together the two authorities ruling God’s people. 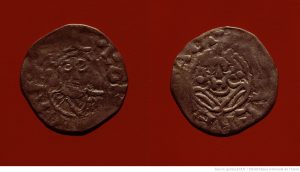 So, his thought illustrates that the conceptualisation of kingship was in constant flux. Ideas about how to be a king were in a state of constant creation, as the balance of opinion – the Overton window, you might say – shifted hither and yon in response to ongoing debates. Even if Adalbero of Rheims might have questioned older ideas about royal authority, Adalbero of Laon went out of his way to reinforce them, on parchment and in metal. After Empire, maybe – but perhaps not over it…

*One problem with these coins is that the quality of striking tends not to be very good, as the example shown here – source gallica.bnf.fr/BnF – illustrates. If you want to see a version in better condition, then there’s a good example at no. 10 here.

Fraser McNair is an Alexander von Humboldt Fondation postdoctoral fellow at Eberhard Karls Universität Tübingen, working on the relationship between episcopal and royal authority. He also blogs at salutemmundo.wordpress.com.