The religious landscape of the tenth century is usually described as consisting of a hotchpotch of localities. Defining what was ‘local’ in the Middle Ages, however, is rather difficult for modern scholars. It could comprise a diocese, a town, a monastery, or a community of canons – all entities that were not necessarily separate from each other. A community of canons could be in close contact with a town and its neighbouring monastery, and a monastery could have strong ties to the diocese. The intertwining of religious communities makes us think about the influence of local saints in communities outside the home of the patron. How far did the arms of a local liturgical tradition reach? 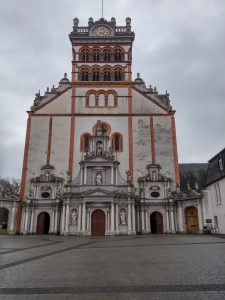 As a small case study, I will look at the local cult of St. Eucharius, the founding bishop of the church in Trier, and one of its patrons. The centre of the cult of Eucharius was, and is to this day, the monastery of Matthias, a twenty-five-minute walk south of Trier city centre. In the tenth century, the monastery was dedicated to Eucharius, whose sarcophagus stands prominently in the church’s crypt. Only later did the monastery become dedicated to the apostle Matthias, whose remains were found in Trier in the eleventh or twelfth century. Eucharius is said to have Christianised the area of Trier, and he became the first bishop of the formerly ‘diabolic’ city in the third century AD. Therefore, he was an important patron for the cathedral church of Trier as well as his ‘own’ monastery, and an authoritative figure for Trier’s archbishops.

One way to map the region in which the local saint was venerated is to study the manuscript traditions of the liturgical texts about  the saint. Although one must take into consideration the great number of manuscripts that may not have survived the test of time, the remaining material can tell us more about the centres in which the texts were known.

Several liturgical texts from the tenth century on the office for Eucharius survive: a vita, various sermons, prayers and liturgical chants for the Matins. Most of these texts, however, only survive in a single codex from this period: Wolfenbüttel, Herzog August Bibliothek cod. guelf. 1109 Hemst.  This codex was written around 1000 AD for the Trier community of Eucharius, or for the canons of the cathedral, and contains many liturgical texts on several of Trier’s saints.  Aside from this codex, there is only one manuscript from before the twelfth century that contains a sermon on Eucharius: Verdun, Bibliothèque de Verdun ms. 74, that, based on palaeographical grounds, may have been written in the vicinity of Echternach. Echternach was tightly linked with Trier through the respective monastic communities of Echternach and St. Eucharius, and the centres  belonged to the same diocese.

One liturgical text for the celebration of Eucharius’ feast was widely disseminated: the vita Eucharii, Valerii et Materni. This vita narrates the life, miracles and death of Eucharius and his two companions Valerius and Maternus. From the tenth and eleventh centuries, manuscripts survive with this text with a provenance of different centres in Trier, Echternach, Metz, Lorsch, and St. Gishlain.

The earliest manuscript of the vita is Paris, Bibliothèque nationale de France, lat. 10864, which has been dated to around 900 and localised to Echternach. The presence of Roman numerals in the margins indicate that parts of the vita were read during the Matins, suggesting that the vita formed part of Echternach’s liturgy. Taken in combination with the Verdun manuscript (and its apparent Echternach origins), this Paris manuscript supports the idea that the cult and liturgy of Eucharius was well established in Echternach.

However, most manuscripts of the vita Eucharii  from before the twelfth century do not show signs of specific liturgical use.  For example, the manuscript, Brussels, Bibliothèque Royale II 976, written at the end of the tenth century, has a provenance of the Flemish house of St. Gishlain but was probably written in Trier. The vita and a bishop’s list of Trier bishops were bound together with the Diadema Monachorum by Smaragdus, a ninth-century text on the virtues of monks. Rather than being for liturgical use, this copy of the vita appears to have had an educational or contemplative function. Plausibly, the manuscript was a gift from a Trier community to the newly-founded monastery of St. Gishlain. An exchange of libelli to enhance ties between different centres was not an uncommon phenomenon. The liturgical texts of Eucharius from the Verdun manuscript, for example, were written in the surroundings of Echternach, but transported to St. Vanne in Verdun at the end of the eleventh century.

From the eleventh century, we find manuscripts with the vita Eucharii that are bound with lives of patron saints from various other localities. The combination of saints’ lives preserved in these manuscripts gives us an indication as to  which region or centre they were used. By the end of the eleventh century, the life of the patron saint of Trier was accessible in different centres, from Regensburg to Lorsch to Verdun. The most common combination of saints’ lives however is that of Eucharius and Willibrord, the patron of nearby Echternach. It would be wrong, however, to assume that Saint Eucharius was a ‘celebrity’ saint with a regional function. Most vitae of Eucharius with a provenance outside Trier were written in either Trier or Echternach, indicating that knowledge of the saint was retrieved from the centre of the cult, and was not typically dispersed or propagated by or between centres outside Trier.

Let us now return to the original question: how long do the arms of Eucharius reach in the tenth and eleventh centuries? From this short survey of manuscript material, the image forms of a saint with a firm liturgical base in Trier and Echternach, and with tentacles that started to grow from the eleventh century onwards, spreading out to separate centres across southern German lands and Lotharingia. These different centres may have known about Saint Eucharius, but there are no clear signs of active veneration outside the see of Trier.