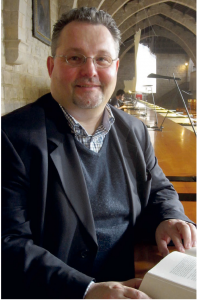 Our PI in Barcelona, Matthias M. Tischler, has recently given an interview to Catalunya Cristiana. In his interview, Matthias presents the aims of our HERA-project “After Empire” (UNUP), discussing in this framework the more or less unknown richness of the legacy of Carolingian and post-Carolingian manuscripts from long tenth-century Catalonia and the necessity of an adequate presentation of this integral part of Europe’s early medieval history in the 21st century. He shows that our picture of the post-Carolingian era would be incomplete if we would not take into consideration the contributions of transforming the variegated Carolingian culture in a middle-ground of encounters and entanglements that medieval Catalonia was in the Euro-mediterranean world. The pioneering Barcelona project thus also contributes to the full integration of Early Medieval Studies in Catalonia into the international network of top-level research.

You can download the interview here in Spanish and in Catalan.