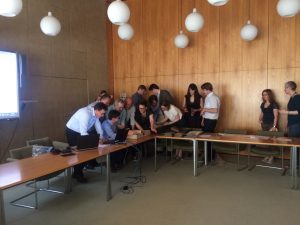 On 17th May 2017, in the leafy environs of Topoi Haus Dahlem, the Freie Universität Berlin hosted the inaugural conference of our project, ‘After Empire: Using and Not Using the Past’, funded by HERA and bolstered by a selfless donation from Professor Patrick Geary’s Annelise Meier Fund. With an intentionally open theme and speakers ranging from first- year PhD students to professors, and chairs from the USA, UK and Austria who added important contributions to our discussions, participants shared their research on many and varied aspects of the tenth and eleventh centuries across two and a half days; delegates were also fortunate enough to handle and explore a number of tenth- and eleventh-century manuscripts in Berlin’s Staatsbibliothek, thanks to the generous assistance of Eef Overgaauw. Below is a synthesis of some of the key themes of the conference, the discussion that took place, and my hopes (as organiser of the conference and member of the project) for future avenues of research. The presenters’ abstracts are also included below for those who are interested. 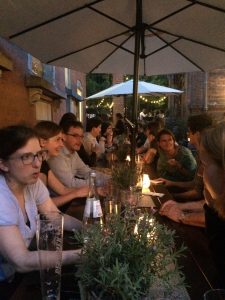 I was thrilled to discover the geographic coverage of the research presented: papers explored uses of the past in the West Frankish kingdom and Lotharingia, in the Ottonian empire, in northern and central Italy, and in Spain. At future events we hope to extend our purview even further, and post-conference discussion has highlighted the need to look to east central Europe especially. Chronologically, our discussion extended from the dwindling of the Carolingian Empire in the later ninth century through to the eleventh and even twelfth centuries: it was notable that the two papers that stretched our chronological boundaries were by two of ‘After Empire’s principal investigators, Sarah Hamilton and Stefan Esders. Again, we intend to continue this tendency and ensure that the purview of the project stretches beyond the tenth century and into the eleventh; our aim, after all, is to break down national narratives and narratives of periodisation. This will undoubtedly require further expertise from scholars working on the eleventh and twelfth centuries outside the project. Our speakers ranged from household names of tenth-century history to PhD students at all stages of study. This latter group were able to present their research in dedicated sessions, and to receive constructive and detailed feedback and questions from our assembled audience. Through this blog, sessions at larger conferences, and workshops and events curated by the project, the members of After Empire hope to build on the wonderful spirit of collaboration so in evidence at our inaugural conference.

The conference eschewed the traditional keynote (a necessity when faced with so many eminent speakers in one room!), and so Stuart Airlie kicked off the conference proper with a historiographical survey that encouraged us to keep in mind ‘diversity, plurality, scepticism’, raising important issues surrounding our understanding of reform, change, and how we deploy and interpret earlier scholarship. Over three days, presenters adopted a variety of perspectives, from those covering a single author to broad analysis of the transfer and movement of knowledge across national boundaries. Liturgical practice and writing occupied a prominent position in the programme, perhaps unsurprisingly, for liturgical writing offered diverse religious communities across Europe an opportunity not only to commemorate their own past but also to manipulate it. But others emphasised alternative forms and methods of rewriting and engaging with the past, in charters, accounts of ecclesiastical foundations, and in the use of biblical typology. One of the recurring themes in discussion was a need to look carefully at how we approach concepts of forgery, the assumed ideologies behind it, and the value of such documents for understanding the uses of the past. 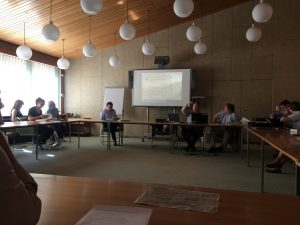 For a conference that spent much time considering the Ottonian empire, so often marked by descriptions of its lavish and multivalent performative acts, political ritual occupied a somewhat peripheral position, although important contributions nevertheless illuminated this topic. Similarly, while the bulk of papers focused on manuscripts and written culture, project PI Simon MacLean closed the conference with a new take on the famous Lothar Crystal, arguing for its possible creation in the tenth century. Looking ahead, it is my personal hope that we will be able to continue to bring material culture into discussion in the context of ‘using the past’, through contributions from art historians and numismatists, alongside our current sorely-needed research as a project into the transmission of manuscripts.

The conference demonstrated that exploring uses of the past in the tenth and eleventh centuries is both necessary and rewarding, with exciting research going on in the USA, UK and Europe. Much of this research departs from more traditional historiography (indeed, one participant remarked that many papers looked at written culture with a depth and focus more usually associated with the research Carolingian historians) in that it treats the period under consideration on its own terms: not simply as a pale imitation of what had gone before or a foreshadowing of the reform movement, but as a time of political, intellectual, liturgical and creative experimentation that looked both forwards and backwards.