In most accounts of modern German historiography, the period of the Ottonian and Salian rulers is featured as a period of national origins. The perspective adopted by the HERA project, however, is different. Since it focuses on the uses of the past, it allows us to look at this period from a different perspective. The rule of Conrad II, the first Salian ruler who became elected king in 1024, may serve as an example here. On the circuit following his election, Conrad II confirmed numerous charters, as the appointment of a new king was a typical situation when legal pasts became present. At every place Conrad was visiting, ecclesiastical and lay nobles were already waving their old charters they now wanted to have confirmed by the new king. One such charter, issued to bishop Walter of Speyer on 24th of July 1025 (MGH DD K II, no. 41), gives us a glimpse into the fabric of law at this time. 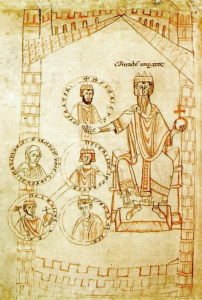 By his diploma, Conrad II confirmed an exchange of church dependents carried out by bishop Walter who had presented his private charters to the king, as the king had to give his consensus to an exchange of church property. Walter, it is stated, had manumitted eleven servile church dependents into the status of censuales, a group designation which comprised ecclesiastical dependents who enjoyed freedom from slavery and from corvees, but were still placed under patronage of the church whose serfs they had formerly been. The manumitted should henceforth along with their offspring spend their lives safely forever “according to the law of censuality” (infra legem censualem), meaning that they should pay an annual tributum of two denarii or wax on the feast of the birth of St Mary (8th of September). In the charter’s narrative part it is emphasised that to compensate for the loss of church property caused by his manumission, Walter had donated eleven unfree persons (mancipia) to the church, and that he had done so not out of arrogance, but in accordance with both canon law and the authority of his predecessors’ capitularies, namely laws given by Charles, Louis and Lothar (canonica capitularisque antecessorum nostrorum Karoli, Luduuici, Lotharii auctoritate fultus). To affirm the procedure’s legality, the charter refers to a reading of canon law, as it is written in the 65th chapter of the 5th Council of Toledo that ‘a bishop is entitled to manumit ecclesiastical slaves and confer freedom upon them provided he gives unfree serfs in exchange’. Moreover, the charter goes on to say, that in the capitulary of the above mentioned kings one finds the quotation: ‘Without giving unfree in exchange no bishop is allowed to confer liberty to anyone’. According to this double legal principle, that is canon and capitulary law (canonica et capitulari lege), Conrad II, in the dispositive part of the charter which follows straight on, gave his assent to bishop Walter’s petition and ordered the eleven freedmen to have the same legal status as other censuales. A huge fine is fixed for any acting contrary to his charter, 10 pounds of gold, one half to be paid to the royal chamber, the other half interestingly to the censuales, which underlines the importance of this social group.

It is the double legal justification which interests here, for the charter, quite unusually, explicitly refers to a conciliar canon from Visigothic Spain, and also to a capitulary provision less easy to identify. In has already been observed that the quote was not quite correct, as the provision did not derive from the fifth, but actually from the fourth council of Toledo. This mistake is very telling, as it leads us straight to the sources used by the person who drafted this charter, most likely bishop Walther himself. For also in the famous canon law collection compiled by bishop Burchard of Worms at exactly this time, the passage is authorised wrongly as taken from the acts of the fifth council of Toledo. The charter’s quote thus appears to have been borrowed directly from Burchard’s Decretum. It is, however, less clear what capitulary provision the charter was referring to. The capitulary collection of Ansegis may have been a source, as we find the somewhat undetermined series of Charles, Louis and Lothar already in the preface of this collection.

What does this tell us about the uses of the past? First, the legal material for this charter, or, more precisely, for the bishop’s charters presented to Conrad, was taken from two major law collections, the capitulary collection of Ansegis, written in the late 820s and spread widely as some sort of official law-book, and the Decretum, which bishop Burchard of Worms compiled somewhere in a monastery close to Worms shortly before the charter was issued; the latter made accessible large parts of early medieval canon law in systematic fashion, so that it could make sense in early eleventh-century Speyer to quote a canon from a Visigothic council. From Burchard’s Vita we have the interesting detail that he compiled his Decretum with the help of his fellow-bishop Walther of Speyer, who was a close friend of his. The charter thus has to be understood as reflecting a personal network of two episcopal legal experts.

In asking his episcopal charters to be confirmed by the new king, bishop Walter, a close fidelis of Conrad II, did two things: first, he asked Conrad, by giving his consensus to such an act, to comply with the principle of the inalienabilty of church property. But, second, a profoundly new aspect was introduced by Walter as he actually sought to drag the ruler into the business of protecting the legal group of the censuales. It thus seems more relevant that reference is made here to Carolingian capitulary law than to ecclesiastical law. Using Carolingian precedent imposed on the king the role of warranting the liberty of a new social group that would soon come to play an important part in the episcopal cities of the Middle Rhine Valley such as Speyer, Worms and Mainz. It is exactly at this time shortly after the year 1000 when we see the first attestations of the lex censualis. The explicit reference to written law in the charter thus indicates that the bishop was fully aware that he was breaking new ground here. We can also infer from several passages in Wipo’s depiction of Conrad’s deeds that there was some debate on liberty and freedom going on at exactly this time. These debates point to the future of newly emerging groups that would soon play an important role in episcopal cities and communes. Walter of Speyer’s attempt to hold the ruler responsible for maintaining the liberty of his free subjects, the censuales, may thus also have been inspired by the idea of liberi homines so present in the Carolingian capitularies. At any rate, his use of the Carolingian past appears as creative as it leads us straight to the social dynamic of a period which drew heavily on a variety of resources of the more distant past to cope with its immediate present.