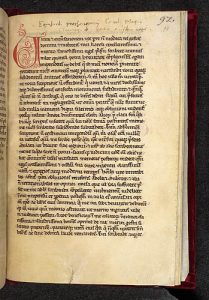 Mid-twelfth-century copy of the works of Regino of Prüm and Thegan. The British Library, Egerton 810 f.94. Image in the Public Domain.

Any casual reader of the relevant modern historiography would rightly come away with the impression that the legacy of the Carolingian Empire was pervasive across centuries of European history. The figure of Charlemagne was particularly attractive to posterity: idolised by French rulers from the Capetians to Napoleon, and canonised by Frederick Barbarossa in 1165. How, though, should we characterise this spectacular Nachleben? As a continuous legend, nurtured in turn by successive generations? Or as a discontinuous series of only loosely connected rediscoveries and reimaginings? On the whole, historians tend to favour the former, and to trace the myth of Charlemagne in a continuous line starting from his death in 814.

The tenth-century Ottonian dynasty constitutes an important link in this imagined chain. The Ottonians were the family which ultimately succeeded the Carolingians in East Francia, Lotharingia and Italy, and they are commonly supposed to have founded their status in part on a story of continuity from the Carolingian past. After all, four of the five Ottonian kings were crowned at the great Carolingian palace of Aachen, founded by Charlemagne and treated as the seat of empire by his successor Louis the Pious. Histories of the family written by their friends such as Adalbert of Magdeburg and Thietmar of Merseburg explicitly or implicitly linked the Ottonians to their Carolingian predecessors. And when Otto III visited Aachen in 1000, he even had Charlemagne’s body exhumed and reinterred, perhaps as a prelude to having him proclaimed as a saint.

There are, nonetheless, reasons to suspect that the Carolingians were not a straightforward resource for the Ottonians’ sense of their own legitimacy. On the whole, authors of pro-Ottonian narratives were reluctant (or did not think) to give the Carolingians prominent roles in the stories they told about the new dynasty. One reason for this might have been that the Ottonians came from Saxony, which had been famous in the ninth century for holding out against Charlemagne’s imperialism during a decades-long and bloody war at the end of the eighth century. Another was that there were still actual Carolingians, descended from the line of Charles the Bald, ruling West Francia between 936 and 987. Although much weaker than the Ottonians, their presence made it a lot harder for supporters of the Saxon dynasty to integrate their own narratives with a longer Frankish story reaching back into the ninth century and beyond.

We also have to wonder why the triumphal narratives of the Ottonian rise only begin to appear around 960. Some have speculated that this flowering of historiography was linked to the imperial coronation of Otto I in 962, but the shift also coincides with the royal inauguration of the six-year-old Otto II in 961. This took the dynasty into a third consecutive generation, which was a rare occurrence in any of the former Frankish realms after 888. Secular history-writing in the early Middle Ages was largely constructed around the doings of royal dynasties. The absence of extended contemporary histories for the half-century before c. 960 could therefore be interpreted as reflecting a lack of confidence in the future and a perception that the authority of the Ottonians remained provisional. Indeed, the Ottonian narratives more or less say as much: according to Widukind of Corvey, Saxon rule almost came to an end during the major rebellion of 939. It was safe to reflect upon such past weakness in the aftermath of Otto I’s definitive victory over the Magyars in 955 and the two coronations of 961 and 962. But in the first half century of the tenth century the uncertainty was sharp. In such a context, with the medium term dynastic future uncertain, would a strong association of the new ruling family with a glorious Frankish past have even seemed relevant, never mind plausible? 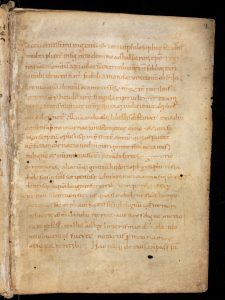 A tenth-century manuscript of Regino of Prüm’s Chronicon. Schaffhausen, Stadtbibliothek, Ministerialbibliothek, Min. 109, f. 2r. Image is in the Public Domain under CC0.

In fact, a sense of the remoteness of the Frankish past is detectable already in the last long-form Carolingian narrative, the Chronicle written in 908 by Regino, abbot of Prüm in Lotharingia. This work took the form of a world history running from the Incarnation of Christ down to the year 906, and is notable for being the first text to provide an account of the Carolingian Empire’s rise and fall. The story of its rise came from the by-now canonical Royal Frankish Annals, reproduced virtually word-for-word, while the fall was told from the perspective of Regino’s own life experiences. But almost as remarkable is what Regino didn’t know. His account of the divorce case of Lothar II, which dominates the middle part of his second book, appears to be based exclusively on a single manuscript containing selected letters pertaining to the controversy. And concerning the reign of Charlemagne’s son Louis the Pious, Regino lamented that he was virtually ignorant, ‘because I have not found written texts, nor heard from the seniores anything that was worth committing to memory.’ This is truly remarkable, given that Regino was writing in Trier, one of the major cultural centres of the Carolingian world and the place where one of the two widely-disseminated biographies of Louis the Pious had been written in the 830s. If we can expect anyone living c. 900 to be knowledgeable about the history of the Carolingians it would be someone like Regino: a scholar, a member of the social elite, and a holder of high ecclesiastical office. That he was not is puzzling, and should make us wonder about the strength of the narrative thread which supposedly bequeathed the Carolingian story to its post-Carolingian heirs.

Regino’s Chronicle therefore serves not only as the final monument to the rich Carolingian tradition of contemporary history-writing, but also as an illustration of the paradoxical relationship between the post-Carolingian world and the Carolingian past. Tenth-century politics were undeniably a consequence of the history of the Carolingian Empire; but the ways in which contemporaries assigned (or didn’t assign) value to that history were various and complex. The problems raised by Regino’s text are, in other words, precisely those which the UNUP project seeks to explore.

S. Airlie, “‘Sad stories of the deaths of kings”: Narrative Patterns and Structures of Authority in Regino of Prüm’s Chronicon’, in S. Airlie, Power and its Problems in Carolingian Europe (Farnham, 2012).

C. West, ‘Regino of Prüm and the Lost Manuscript: Knowledge of the Past and the Judgement of History in Tenth-Century Trier’, Early Medieval Europe 24 (2016), pp. 137-59