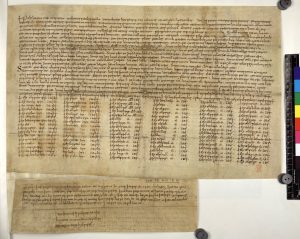 London, British Library, Cotton Charter viii. 16: the original single sheet of a royal diploma of King Æthelstan, drawn up in AD 931 by the anonymous draftsman known to scholarship as ‘Æthelstan A’ (Sawyer 416). Image in the Public Domain.

Historians have often framed tenth-century England in far more positive terms than scholars examining contemporary continental Europe. Often characterised in terms of cultural renewal, this was also the century in which ‘England’ emerged as a political entity for the first time; combined, the two offer a heady mix for those seeking a nation-focussed narrative. Within this context, engagement with the past pervades almost all corners of the surviving written corpus, whether it be the various recensions of the so-called Anglo-Saxon Chronicle, or the rich collection of hagiography produced in the later decades of the century. Perhaps less obviously, the past also looms large in what is in fact the most numerous body of literature surviving from tenth-century England, namely charters.

For scholars of Anglo-Saxon England, the term ‘charter’ can denote a wide variety of documentary records, and indeed, the corpus of charters from tenth-century England is remarkably varied. It includes wills, letters, leases, writs, as well as a considerable number of more miscellaneous items. Strikingly, much of this material was written predominantly in the vernacular (that is, Old English). The majority of surviving examples are, however, royal diplomas, those documents issued on behalf of the king that recorded perpetual grants of land and associated privileges. These, unlike many other contemporary records, were written for the most part in Latin. In doing so, they adhered to the language, as well as the form, of a diplomatic tradition that was sustained throughout the entirety of the Anglo-Saxon period, ever since its introduction to England in the seventh century.

The question, then, is how did tenth-century kings and their contemporaries use – or not use – this tradition? One needs to bear in mind that within personal and institutional collections earlier charters were still there to be found and sometimes, in fact, called upon within certain judicial settings. Thus, tenth-century individuals were no doubt aware of the ‘ancient’ pedigree of the Latin charter form. One way in which such older material could be invoked explicitly was through their use as models for the production of new charters. It is not, however, the earliest surviving charters from the seventh century to which tenth-century draftsmen turned; rather, as Ben Snook (The Anglo-Saxon Chancery (2015)) has recently demonstrated, it was the diplomatic phrasing of the later ninth and earlier tenth centuries that was reproduced most frequently in mid and later tenth-century royal diplomas. We can only speculate as to why this is the case. For one, in most instances it is not certain how a draftsman would have come across earlier diplomatic phrasing, since there is no definitive evidence for the existence of formularies in Anglo-Saxon England. Furthermore, it is often unclear whether a draftsman was aware of the earlier provenance of a given diplomatic phrase. Nevertheless, Snook has posited that the use of late ninth- and early tenth-century formulae reflected a desire to build a sense of dynastic continuity for the kings of tenth-century England. For certain examples this interpretation may well be applicable and one might imagine, therefore, the ‘performative’ settings in which such activity may have taken place.

A crucial feature of royal diplomas in the tenth century is that many were produced by royally appointed draftsmen, as opposed to in earlier centuries, when Latin diplomas were produced by individuals acting on behalf of the beneficiaries. This development has been the subject of vigorous scholarly debate – concerning both its start-date and the extent to which such royal agents dominated production – though there is increasing appreciation that tenth-century royal diplomas need to be seen as part of the expression and performance of royal ideology. This arguably sets the predominantly Latin diplomas of the tenth century apart from those earliest surviving examples of the late seventh century, which exhibit far less obvious concern with enhancing the status of the benefactor and which instead are seemingly focus squarely on the ecclesiastical beneficiary of their perpetual donations.

These shifts in the production and conceptualisation of the royal diploma, furthermore, need to be framed within a documentary landscape that was deeply bilingual. Even within these royal diplomas, considerable amounts of Old English are to be found within their bounds and endorsements. Moreover, to understand fully the social, cultural and political values that these predominantly Latin texts held for contemporaries, one needs to recognise the variety and scale of surviving vernacular material elsewhere within the tenth-century corpus. Put simply, once one has excluded spurious material, there is good reason to believe that beyond royal diplomas, predominantly Old English records heavily outnumber those predominantly in Latin. On the one hand, this situation undoubtedly attests to the sheer range of contexts in which the written word was being employed in later Anglo-Saxon England – that there was, in other words, a vibrant documentary culture beyond the production of royal diplomas. On the other hand, it suggests that the continued fostering of the Latin charter tradition offered a particularly prestigious form of capital for kings and those other individuals for whom surviving Latin charters were issued.

Robert Gallagher is a postdoctoral researcher for the Languages of Early Medieval Charters project based at the University of the Basque Country. For more information, please visit www.ehu.eus/lemc