Hello, I am Ekaterina Novokhatko, the PhD fellow for the ‘After Empire’ project based in Barcelona. Our project here deals with the Written Genesis of Catalonia during the long tenth century.

Nowadays, nearly everyone seems to be talking about identity: religious, national, cultural, social or ethnic. Comparison and opposition between personalities, social groups or even entire nations are omnipresent. The European Union has added another dimension, and a new set of historical problems linked to the questions of common mentalities and common cultural and historical identities on a continental scale.  Personally, I think a bit of knowledge might help with these heated debates. The Carolingian period, which I deal with, represents, for instance, a stage in the conglomeration of different political regions and powers. At a moment when lots of the certainties about our world are being questioned, revisiting the Carolingians and their aftermath feels particularly important. 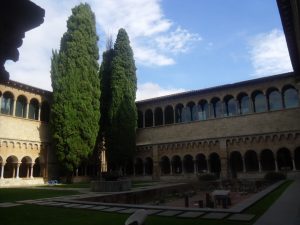 Post-Carolingian society can be viewed as a continuation of the Carolingian political heritage. On the other hand we find an increase in the range of secular and religious centres of power. This transitional period is therefore characterised by a tentative balance between various local powers. At the same time, the big machinery of Carolingian liturgical and religious reform does not stop moving. It is this balance between fissiparous forces and dependence of a larger whole that I am studying at the local level of Catalonia. My PhD thesis seeks to understand the Carolingian conception of Christianity and Christendom, to investigate its development during the period of transition from Marca Hispanica inside the Carolingian Empire to a more ‘autonomous’ Catalonia from the end of the ninth century onwards.

One of my basic sources in this endeavour is a sample of monastic manuscripts from the tenth to eleventh centuries. The manuscripts can be analysed in three ways. The first is the study of their content.

For instance, I am interested in three groups of texts: copies of Regula Benedicti, modified and dispersed by Benedict of Aniane in the early ninth century. Liturgical manuscripts also reveal the transition from local ‘consuetudines’ and rules to unified Benedictine rule. Commentaries and treatises dealing with the question of the unification of the Carolingian territories (such as commentaries of Smaragde of Saint-Michiel) will also be looked at.

The second approach is a codicological and paleographical analysis of manuscripts that could help date them and attribute them to concrete scriptoria, reestablishing a history of inter-monastic connections.

Finally, the third approach views the manuscript as an historical witness. In this case, the fact of transporting and copying of these manuscripts elucidates the thought of monastic circles, reflects the values and concerns of their society.

This study of monastic texts of the Carolingian and post-Carolingian period can then help establish connections between various monastic centers and ‘resurrect’ the monks.  They are important witnesses, and even a force of the mental mapa mundi that was transforming Catalan lands at that time.

This Carolingian and post-Carolingian society penetrated by religious thought may, with a slight stretch of the imagination, be compared with our world. Monks and abbots can be viewed as the eloquent spokespersons of their century. As intercessors between different political and religious centres, they were the focal point for the reconstitution of identities locally and regionally, as well as at wider and broader levels. In trying to understand who we are, and to which group we belong, we are always turning back to real or imagined roots and to the past. The thirst for another life and another reality that parallels this turning back is proof enough, perhaps, of mental and psychological proximity with our ancestors.