One of the most interesting things about studying the tenth century is the great variety and originality of its written sources. While the period’s image problem has long roots in the perceived dearth of available evidence, surviving tenth-century texts often seem to defy typologies and literary models, which are often drawn from other, better-studied eras. Only relatively recently have scholars come to appreciate the innovation and ambition in the works of authors such as Odo of Cluny, Atto of Vercelli, Rather of Verona and Hrotsvitha of Gandersheim.

Such idiosyncrasies are what first led to my interest in the historical works of Flodoard (893/4–966), a canon of the church of Rheims. Though he is a rare narrative voice in this period, his works – especially his Annals – remain poorly understood. The Annals are regularly sifted because they constitute the only major contemporary West Frankish chronicle in the years they cover (919–966), yet they have tended to confound modern readers on account of their peculiarly laconic style. Flodoard almost never offered authorial judgements or explanations, instead preferring to string together seemingly unconnected episodes in dry, detached prose. For example, here’s a portion of his entry for the year 954, describing events following the death of King Louis IV: 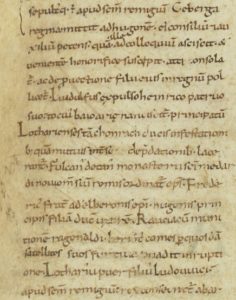 Paris, Bibliothèque nationale, lat. 9768, written in the late tenth or early eleventh century, comprising the ninth-century Histories of Nithard and the Annals of Flodoard. Here, f. 43v, Flodoard’s annal for 954. Image in the public domain.

‘Queen Gerberga sent to Hugh [the Great], asking for his counsel and aid. Hugh met with her, receiving her honourably and consoling her. He made promises to her concerning the succession of her son to the kingdom. Liudolf obtained the rule of all Bavaria after his uncle Henry had been driven out. The Lotharingians were mauled by attacks of Duke Conrad and by the raids on each side. Fulchar, the dean of the monastery of Saint-Médard [of Soissons], was ordained bishop of Noyons at Rheims. Frederick, the brother of Bishop Adalbero, married the daughter of the princeps Hugh [the Great]. Count Heribert captured Ragenold’s fortress of Roucy by means of a sneak attack on some of his supporters. The boy Lothar, son of Louis, was consecrated king at [the monastery of] Saint-Rémi by Archbishop Artold…’
(trans. adapted from S. Fanning and B.S. Bachrach, The Annals of Flodoard of Reims, 919–966 [Peterborough, ON, 2004])

Why write like this? What kind of story does this tell? Was there something that linked these events, or were readers expected to fill in the gaps for themselves? Modern scholars have searched these reports for unifying principles or purposes without much success. Some have concluded that Flodoard was just unusually honest and impartial (and therefore highly reliable). Perhaps he simply told it as he saw it and deferred judgement to God. Others have supposed that annals represent a rather primitive genre of historiography through which an historian learns their craft. Indeed, one can point to the fact that Flodoard reproduced large parts of the Annals verbatim in his huge History of the Church of Rheims (completed around 952). But this doesn’t explain why he kept writing annals until his death in 966. At any rate, annalistic chronicles were a standard historiographical form throughout the early Middle Ages.

Another puzzle is presented by the fact that Flodoard clearly had a deep sense of history and its representation. He had an acute familiarity with Roman, Christian and Frankish historiographical traditions, as demonstrated in his History of Rheims and The Triumphs of Christ, an epic history of the martyrs, popes and saints told in nearly 20,000 lines of verse. He also knew well the ninth-century Annals of Saint-Bertin, written by Hincmar of Rheims, a much more explicatory account crammed with opinion, polemic and predilection. And, as the History and Triumphs show, Flodoard was obviously capable of narrativizing.

All this indicates that Flodoard wrote his annals in a quite deliberate fashion. I suspect there are two main reasons for this. First, annals permitted him to be discreet and to avoid casting judgement on the powerful individuals with whom he regularly rubbed shoulders. For almost all of Flodoard’s life, his church of Rheims was at the heart of wider political struggles which rocked the West Frankish kingdom. As the historian tells us, he took sides in these controversies and was punished for his defiance on two separate occasions, in 925 and 940. He learned the hard way to be careful about what one said and wrote. Flodoard did not write in a vacuum; annals allowed him to keep a low profile.

But I also think Flodoard wanted to make a broader point about his time. The Annals paint a notoriously bleak picture of West Francia in the wake of the demise of the Carolingian Empire. Because Flodoard is the only historiographical witness to the turmoil of his day, his depictions of royal feebleness, warfare, rebellion, disloyalty, assassination and plunder have become canonical in our own conceptions of the period. For an author who was so historically-minded, so well-versed in the Christian, Frankish and recent Carolingian past, this changing world was shocking. Flodoard understood his own time in relation to these imagined pasts, and this darkened his view of contemporary life. Early medieval annals and chronicles were not usually conceived as standalone works of history; they were rather intended in one way or another as continuations that would be compiled in history books with earlier historiography. Authors like Flodoard wanted to link their own times with the sweep of Christian history. Perhaps Flodoard, in the knowledge that his Annals would be used in this way, sought to draw a cynical contrast between the ills of his own age and an idyllic past which looked increasingly distant from his vantage point.

One way to make sense of the Annals, then, may be to read them as the pessimistic journal of a man who perceived his age as one of decline. He chose to present this apparent decline through disorienting, paratactic sequences, subtly impressing on his readers his conviction that everything was spinning out of control. It’s easy to look back and scoff at the way this period was crassly written off until quite recently. But was it those scholars who made it an ‘age of iron’, or were they just repeating a tale told by contemporaries like Flodoard?

Edward Roberts is a Leverhulme Trust Early Career Fellow at the University of Liverpool studying episcopal power and culture in the tenth century. His first book, History, Politics and Intellectual Culture in the Tenth Century: The Individuality of Flodoard of Rheims, is forthcoming with Cambridge University Press.