The Primordia de coenobiis Gandesheimensis of Hrotsvitha of Gandersheim, likely composed in the 970s, is often used by historians as an excellent example of female commemoration – that is, how early medieval women, especially in tenth-century Saxony, preserved the memory of their family’s history. In this case, the commemoration came from a convent of canonesses founded by the Liudolfing family, which went on to become the Ottonian dynasty. Under the direction of Abbess Gerberga, the niece of Emperor Otto I, Hrotsvitha created a new version of Gandersheim’s own origin story, one which glorified the role of the founding family. 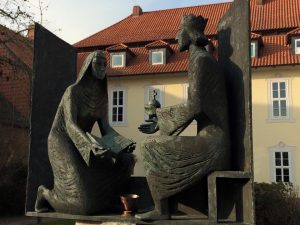 Statue of Hrotsvitha presenting the Gesta Ottonis to Otto I at Gandersheim. Image credit Sarah Greer 2015.

In particular, Oda and Liudolf, the founding couple, and their family take on a central role in the story. After a short and flattering biography of Liudolf, Hrotsvitha provided a striking prophetic scene to begin the narrative of the foundation. One night, while Oda’s mother, Aeda, was lying on the ground in prayer in front of his altar, she received a vision of John the Baptist. As a reward for her devotion, the saint revealed that her family would establish a convent of holy virgins, which would ensure ‘a triumphant peace for the realm’ as long as her descendants’ piety continued. Hrotsvitha elaborated who this meant: Oda and Liudolf, along with their son, Duke Otto, who was the father of King Henry I and the Ottonian emperors who succeeded him. The rest of the text showed how Liudolf and Oda fulfilled this prophecy – they established the community, visited Rome to gain relics, and began to build a new church for the canonesses. After Liudolf’s untimely death, Oda took on total responsibility for Gandersheim, providing for it with donations, ensuring that the church was completed, and seeing three of her daughters become abbesses in turn. Her son, Duke Otto, joined his mother to become another great patron of the community. Oda’s death marks the final section of the Primordia, with Hrotsvitha describing her as ‘the greatly blessed Oda, our hope and dominatrix’.
Yet this narrative presented by Hrotsvitha in the 970s doesn’t completely agree with other accounts of Gandersheim’s foundation. Directly after the death of Hathumoda, the first abbess of the community, Agius of Corvey wrote two hagiographical works on her life and death. In these, Oda is presented in very little detail – rather than being the key figure behind Gandersheim, Agius described her purely as the mother of the saint-abbess. Liudolf wasn’t mentioned by name, and Aeda didn’t appear at all. We also have mentions of the origin story in diplomas granted to the convent, most of which do note that Liudolf and Oda were Gandersheim’s founders. However, a papal charter from 948, which was granted to Gerberga’s predecessor, Wendilgard, also elaborated briefly on the foundation of the monastery. According to this document, Gandersheim had been established by Otto, comes of Saxony, with no mention of Oda or Liudolf at all. 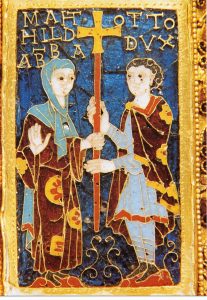 Donor portrait of Abbess Mathilda of Essen and her brother Duke Otto of Swabia and Bavaria on the Otto-Mathilda Cross now held in Essen Cathedral Treasury.

So, if Hrotsvitha had several varying versions of Gandersheim’s origin story at hand, why did she choose to write this version which so strongly emphasised the pair of Oda and Liudolf and their family? A clue may come from the parallels that Hrotsvitha could make between these figures and current members of the Ottonian family in the 970s. The central pair of Liudolf and Oda in the text, the pious husband and wife who founded the convent, look a lot like Otto I’s son, Duke Liudolf, and his wife Ida. Liudolf and Oda’s son, ‘the illustrious Duke Otto’ of Saxony, shared his name with the son of Duke Liudolf and Ida: Otto, Duke of Swabia and Bavaria, who was the rising star on the political stage of the Ottonian Empire in the 970s. Along with the names, Hrotsvitha could let her narrative bring the current generation to mind. The trip of Liudolf and Oda to Rome would have reminded readers of the similar trip of Duke Liudolf to Rome that she described in her other historical work, the Gesta Ottonis. On top of that, both Liudolf and Duke Liudolf had sadly died at an early age. Oda, the perfect patron of Gandersheim in the text, may well have been intended as a model that the women of Gandersheim hoped Ida would follow in her widowhood. The pious Duke Otto as well, for whom the canonesses of Gandersheim continued to pray and commemorate, had been able to secure a royal future for his descendants by his support of the monastery – these benefits would hopefully appeal to the current Duke Otto too.

Hrotsvitha made a choice to emphasise figures with strong parallels to contemporary members of the Ottonian family when she wrote the origin story of her convent. By doing this she was able to reshape the past with an eye to changing the present. The branch of the family that came from Duke Liudolf was steadily increasing in prominence at the time the Primordia was created. Being able to win over the powerful Duke Otto as a patron of the convent must have appealed greatly to Hrotsvitha and her abbess Gerberga. That, of course, isn’t to say that the version of the convent’s origin story that Hrotsvitha presented was completely false – Oda and Liudolf were fairly widely regarded as Gandersheim’s founders. However, she did make a deliberate decision to present them in the way that she did, which differed from how they were depicted in earlier versions of this story. Hrotsvitha’s Primordia isn’t simply a record of the past deeds of the Ottonian family preserved at Gandersheim, but is instead a demonstration of how tenth-century authors could use the past to try to achieve their own goals in the present.