Hi! I’m Alice Hicklin, the second postdoctoral researcher working on ‘After Empire’. I’m based in Berlin, where the title of our project is ‘Legal Pasts and Normative Orders’. 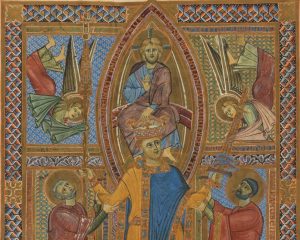 Sacramentary of Henry II, Coronation of Henry by Christ. Bayerische Staatsbibliothek, CLM 4456. Image is in public domain under CC0.

For our contribution, we seek to assess the role of law in the tenth and early eleventh centuries. This is an important objective and area of research, for one principal reason – while the Carolingian kings and princes of the eighth and ninth centuries issued many law codes, and presented themselves as dispensers of justice, their successors across western Europe did not. That is not to say that law and justice no longer had a place in territories that succeeded the former Carolingian Empire: local and regional courts continued to operate, criminals were punished, and disputes were resolved. Yet it is clear that the relationship between the king and justice had changed dramatically in the written record. This is not just reflected in the absence of a comparable corpus of royal legislation, but in the writing of contemporary historians: some of our most important authors for this period, such as Flodoard of Rheims, Widukind of Corvey, and Richer of Saint-Remi, paid little attention to the connection between kingship and justice when compared to their Carolingian forbears.

In my research, therefore, I hope to probe this changing relationship between royal power, contemporary written culture, and law. How did the draftsmen of royal documents in this period frame the king? And how did they use the past whilst doing so? Kings had long been praised in classical and early medieval texts for their ability to secure peace for their kingdoms, through the eradication of lawlessness from society. The Northumbrian historian Bede, for instance, famously wrote that during King Edwin’s reign, ‘a woman with a new-born child could walk throughout the island from sea to sea, without receiving any harm’ (Book II, ch. 17), so successful was he at bringing peace to Northumbria. But during the reign of Charlemagne and the associated expansion of empire, writers emphasised more than ever the enforcement of law as a route to strong kingship, and thus peace. I will test the hypothesis that, in the tenth and early eleventh centuries, writers continued to link strong rulership with the application and enforcement of law. Yet they now did so in new ways, using the Carolingian (and more distant) past in their writing, and shifting their focus further from the creation of law to its enforcement. The flipside to this approach is to explore whether writers framed the actions of those rebelling against royal power increasingly in terms of lawlessness and the violation of law. A key source for my study is the body of documents known as charters, or royal diplomata. In the next blog I post here I’ll break down the contents of these documents, exploring how and why they are useful tools for the historian of early medieval Europe!